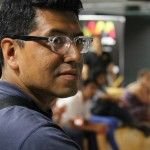 A way to be the director of your afterlife

Matteo, how did you and Leonor Caraballo first think on developing «Icaros»?

Matteo Norzi: From the very moment we met, back in 2008, Leonor and I bonded into an exclusive friendship of continuous exchange. And even if such a deep relationship was born during a difficult time -in the same period when Leonor got first diagnosed with a small lump of breast cancer-, we went through many great adventures. At the time we were both trying to pursue a career as visual artists in New York, and together we felt a lack of satisfaction, the sensation that we were investing our creative energies in an environment that was not really paying back on the spiritual level.

How did Leonor get in touch with ayahuasca and the Amazonic folklore?

Matteo: In 2012, Leonor -inspired by some research she was doing with her partner Abou Farman- invited me to go to the Peruvian Amazon where we got introduced to ayahuasca shamanism as per the contemporary practice of the Shipibo-Conibo people. After spending a few weeks in the very same healing center that would become the main location of the shoot, and still dazed by the astonishing sensations brought on by ayahuasca and the songs of the shamans, we found ourselves wondering around the dreamlike landscape of our journey. That was the moment when Icaros was just an intuition, a dream of freedom and a reciprocal promise for a shift in our destinies to actually accomplish something together that was worth our lives. A promise that kept us going during the most challenging times. Ayahuasca shamanism is much more than folklore. It is a sophisticated technology, a tool to reach regions of our consciousness hard to reach otherwise.

Was there an autobiographic approach in the film?

Matteo: Fatally attracted by this world, we started to write a script about Arturo Izquierdo, a young shaman losing his eyesight, in juxtaposition with a group of foreigners -«los pasajeros»- craving a vision or a revelation. It’s only later on in the summer of 2013 when Leonor’s disease came back as terminal, that we decided to introduce into the script the character of Angelina, an American woman who -having exhausted her medical options- travels to the Amazon in search of a miracle. Basically now looking back at what happened, it feels that the film became what it is by destiny rather than as autobiography. It has been a way to explore the borders between the realm of the living and the dead and for Leonor -even more- a way to be the director of her afterlife.

Abou, tell us about the production process. Where in the Peruvian Amazon did you shoot the film? What difficulties did you find during the shooting?

Abou Farman: The shoot was north of Iquitos at an old ayahuasca center. It was just like a set, though Leo and Matteo and the crew did a lot to make it fit our aesthetic needs. Iquitos is where Fitzcarraldo was shot, so there was cinematic history there, though we wanted a different relationship to the place and to the history, because that was all part of a colonial line extending from the real Fitzcarraldo to Herzog. Iquitos is also the mecca of ayahuasca for foreign tourists -and that can bring its own neo-colonial problems, but we tried to be aware of that. We actually liked the fact that in this context, even if economic power lies elsewhere, there were all these urban, white foreigners whose minds were being orchestrated by Shipibo shamans and Amazonian chants. It’s a contemporary world, not the world of the past. It also may hold promises for a future.

How was the experience of working along the Peruvian crew?

Abou: The Peruvian partners, led by ‘Pinky’ [Enid Campos], went through a lot with us but kept on ticking. Many were less accustomed to and more fearful of the selva than the US crew.

It was tough from the beginning: our equipment coming up the Ucayali on a barge was hijacked by narcotraficantes and got to the set late; then animals and insects attacked the crew, outside and in their cabins; a number of people got sick, one with pretty bad case of leptospirosis. It was hot. Cooking was difficult. But ‘Pinky’ and the crew were professional throughout and stayed with us thankfully, often through arguments and clashes, and by the end, we were all exhausted. I am sure, and Leonor knew this too, that the shoot took its toll on he body and accelerated her cancer. She passed very quickly after we returned, during the first parts of the edit.

What are your expectations to have «Icaros» presented to a Peruvian audience?

Abou: Now it’s out and the film has received lots of good reactions. Peru is its home so we are nervous and excited to see the public reaction to it, Lima first, which is really a very urban crowd with its own ideas of the shamanism and the selva; and then we are taking the film to Iquitos and the healing center in the Amazon and then to Pucallpa, to share it with the Shipibo-Conibo people who participated in this.